The Austin Energy Regional Science Festival, commonly known as simply Science Fest, is one of Texas’ largest regional science fairs with almost 3,000 students from 3rd through 12th grade. At TyRex, we are proud to be part of the many engineers, scientists and professionals who volunteer with this program to help encourage the students who will become the next generation of our technology community and to reward their innovative research. This year, two TyRex companies – Austin Reliability Labs (ARL) and Digital Light Innovations (DLi) – each offered a student internship or scholarship of $2,500. Parker Whitehead of Vista Ridge High School took home the ARL scholarship for his biomedical project, ‘Functional 3D Printed Bone.’ The DLi scholarship, meanwhile, went to Raaghav Bageshwar of College Station High School for his microbiology project, ‘Probing the Oligomeric Structure of the TatBC Complex of the Twin-Arginine Transport Pathway.’ Needless to say, with the innovative thinking displayed through these projects, the technology community of the future is in good hands!

Each February, students whose projects won their schools’ science fairs (as well as some special home school entries) bring their winning projects to the Science Fest at Palmer Events Center for a chance to advance even further. Winning Junior/Senior Division projects advance to the Texas Science and Engineering Fair, Best of Fair Senior Division projects advance directly to the Intel International Science and Engineering Fair, and four projects focusing on applied engineering, sustainable energy, or environmental engineering advance to the I-SWEEEP International Olympiad.

Individuals within TyRex have unofficially supported the Science Fest for years, but the company became an official sponsor for the first time in 2015. Eight members of the TyRex Family volunteered as judges for this year’s competition. Saber Data’s Director of Development Satwinder Kahlon has a special connection to science projects like the ones he evaluated. “I saw my kids go through a similar program and it absolutely helped them in significant ways,” he explained. “My wife and I were coaches for their teams. Now, I can at least volunteer and support these students – on company time on Thursday and on my own time on Saturday. I see it as helping build young scientists. We want to see more and more students participating and helping build their interest in science, and that requires some coaching and encouragement.  Even this small amount of time spent with the students encourages them in a big way.”

Steve Derrick, lab manager at ARL, first volunteered last year and wound up working with a committee from the U.S. military helping select a project with potential military application for a special award. He enjoyed the experience so much that he signed up for the same assignment this year. “My favorite part of helping out at Science Fest is working with the people in my group,” Steve admits. “Working with those folks makes the science fair great fun for me.” Stephanie Martinez, also of ARL, agrees that the experience is all about the people you meet. “I really liked meeting and interacting with the high school students about their projects,” she said. “Listening to their presentations, seeing their passion for their topic of choice and hearing how they recognized a problem and designed a solution to solve it was my favorite part.”

Experienced or not, judging can be tough – many of this year’s TyRex volunteers evaluated more than 15 projects apiece! That might seem overwhelming for one afternoon, but Jason Dunbar and Miguel Barrera of DLi remember a couple of their favorites. “Seeing the excitement in each student’s eyes and hearing how proud they were to talk about their project was great,” Jason reflects, “but the coolest project was ‘The Effectiveness of Combination Therapy of Chronotropic Agents on the Heart Rate of Daphnia magna'”. Miguel recalls both a project and a student that made an impact on him. “One of the projects that stuck with me had to do with cochlear implants,” he recalled. “I asked the student how he came up with the idea, and he said that his sister was deaf and required them.” Both would recommend signing up as a judge to anyone. “I would tell anyone who is thinking about volunteering in the future to go ahead and give it a try,” Miguel encouraged. “You have a chance to meet other judges from all over Austin, and you get to see some projects that just leave you in awe!”

Lisa Martin echoes his sentiment. “This is one of the best uses of my time,” she laughed. “I get far more out of this event than it requires of me. Plus, these kids are fantastic!” TyRex President Andrew Cooper adds, “It was incredibly energizing to be around so much creative positive thinking and endless possibilities. Clearly this younger generation is exploring creative solutions to existing problems with adaptive technology research. These young students are going to make a positive impact and are focused on making a difference.”

That energizing effect wasn’t only felt by Andrew. “Young people have a problem solving mindset which tracks very different than the one I have,” says TyRex principal John Bosch, Jr. “It was refreshing to get this insight into how problem solving will be conducted in the very near future. Also, I am absolutely sure I can take away some very valuable knowledge that will help me with my current business practices.  I recommend this exercise for anyone who has an open mind to learning new ways to approach business or scientific problem solving.” John was also struck by the character of the students he was able to interact with. “I have read in the media a good deal about the quality of character and core values of the Gen Z’s,” he says. “The Science Fest confirmed to me that there are sufficient numbers of this generation who have their heads on straight.  This generation will be ‘good to go’ when it is their time to take the helm.” 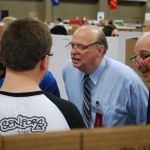 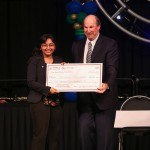 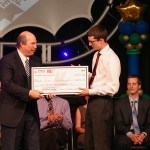 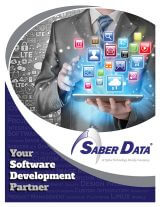 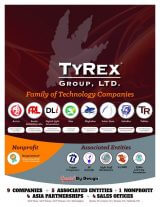